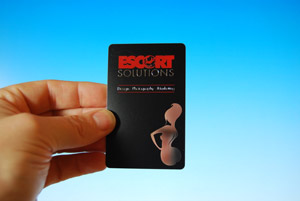 We had a customer who was desperate to receive there order of plastic cards as they wanted to post them out to attendees of an event.

I phoned the courier company mid afternoon to see if they would be kind enough to provide any kind of update, unfortunately they were unable to do this.

At 5.30 our customer still had not received there order of plastic cards, so I rang the courier company again. This time they informed me that the courier van had been broken into & there would be a slight delay, however the order would be delivered by 6.30pm.

This time came and went and no delivery was made. The next day the courier company contacted us to tell us that our customers order has been one of the parcels stolen from the break in.

This was such a shame for the customer as they really needed their plastic cards.

Lucky the customer had another idea up there sleeve and instead of handing the cards out as pre-event tickets they would actually hand them out on the evening as an information card.

We are in the process of re-printing the cards for the customer and fingers crossed this re-print will be uneventful.

It just goes to show you than the unexpected can and does happen. If you know you need plastic cards for an event, get them ordered sooner rather than later so there is plenty of time for anything unexpected to be resolved. I guess this is true of anything in life not just plastic cards!

Find our more about our plastic card printing services: